Moving from Allyship to Solidarity

A discussion guide to help your company shift from actions of “allyship” to those of “solidarity” with marginalised communities.

As our companies aim to build equity and inclusion in their workplaces, we must consider what it will take to move from actions of “allyship” to those of “solidarity” with marginalised communities. While we at Fearless Futures have often used the term allyship to describe equitable actions in service of justice for marginalised communities, we are shifting to use the language of solidarity initiatives because it is real and deep solidarity which more effectively and authentically creates change for these communities. Using this discussion guide, you and your colleagues will learn how to identify the differences between actions rooted in allyship vs. solidarity, and how to actively move towards justice-oriented conceptions of solidarity. This ultimately allows us to create change that is actually meaningful and sustainable, and goes beyond the surface to prioritise minoritised communities rather than our own reputation.

To begin, let’s take a look at the global Black Lives Matter protests of 2020: after the murder of George Floyd by U.S. police, many companies posted black squares with slogans of support for the movement. Let’s take a look at this response to get a sense of the impact these types of initiatives had.

Activity: Compare the following two sets of images and then answer the introductory questions below. 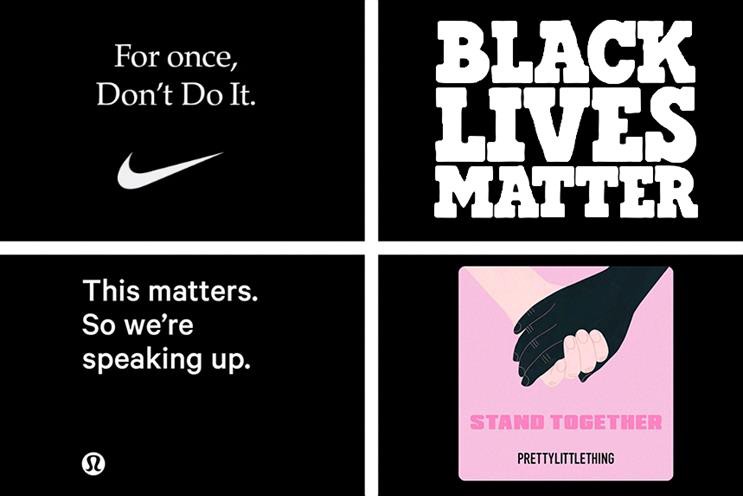 [Image description: A headline from Business Insider says “Former and current Nike employees are sharing their experiences with racism at the company via an anonymous Instagram page– and it’s part of a growing trend on social media.]

[Image description: A headline from Jezebel says “It’s No Surprise Lululemon Would Flirt With ‘All Lives Matter’. “We are not writing Black Lives Matter. That’s not where we’re at,” a director reportedly told copywriters.]

The differences between solidarity and allyship:

The misalignment between the two images in this activity demonstrates the all too common substitution of allyship initiatives for the deeper and more necessary work of solidarity. In the Fearless Futures conception, being an “ally” is a static state, whereas working in solidarity is active. Many companies who posted their Black square during the protests, in the first example, seemed to check off the ‘allyship box’, and then move on from thinking about — and more importantly doing — anti-racism work. While symbolic gestures can be powerful for things like visibilisation and fundraising, they are not enough on their own.

Additionally, these “quick wins’’ may seem effective within a business model framework, but they can sometimes do more harm than good. For example, when a company like Nike brands itself as an agent of human rights, this distracts consumers and investors from human rights abuses it may be engaging in. Most recently, Nike was found to pay poverty wages to thousands of women of colour that sew the football shirts of Football players who Nike pays millions to wear. Applying a critical analysis of allyship and its effectiveness allows us to see the limitations and inconsistencies in our approaches, so we can focus on where we need to target attention and action.

Allyship is often performative — loud and shiny with the intention of showing ‘how much we know’ and ‘how good we are’. We see this often in the form of empty statements or surface-level solutions that require little cost. For example, many universities have adopted a practice of stating a land acknowledgment at their events to honour the indiginous communities whose stolen land they now live on. However, many of these same universities refuse to divest from fossil fuel companies that build oil pipelines across indigenous land, contaminating their sources of water and destroying their access to ancestral land. Statements like these might sound good to those of us not living at the sharp end of the inequity in question, but they require very little actual change. Plus, shiny statements like these may in fact serve to direct attention away from the lack of deeper, more meaningful action. Allyship therefore risks very little, whereas solidarity work requires risking our place/privilege within systems in order to dismantle them.

Solidarity work is often quieter, deeper, and behind the scenes. It requires sacrificing things like money, connections, reputation, time, and labour. On a micro level, this might look like confronting a higher-up manager over an inequitable policy that is harming your marginalised colleagues, even if this is at the risk of your reputation or chances for promotion as an “amicable” employee. At the macro level, this may mean disinvesting from clients that are systemically oppressive, or perhaps using profits to create safer working conditions or provide healthcare for employees. If our actions for equity and inclusion don’t require any cost — we’re likely to leave the status quo firmly intact.

3) Solidarity Binds our Freedoms Together

Allyship tends to use an ‘us’ vs ‘them’ model and positions allies as outside of systems because they are allies. However, a solidarity framework recognises that as Aboriginal activist Lilla Watson coined, “our liberation is bound together.” When it comes to anti-racism, this means that White people must become aware of how they exist in a system that “intentionally miseducated them on racism so that they can continue to perpetuate it.” The first steps to building collective freedom in this case will be to address one’s own White fragility and continuously engage other White people in the practice of unlearning systemic racism. Solidarity work follows the learning of trusted leaders from marginalised communities, and uses this to guide the growth of people who benefit from systems of oppression. Solidarity requires us to acknowledge and account for the ways we always benefit from systems of oppression we are positively targeted by, even if we are deeply and actively committed to disrupting the system that benefits us.

Finally, allyship often focuses on interpersonal transgressions, whereas solidarity actions work to dismantle oppressive structures. We can look to history to see the power of collective action. In the 1970s, a group of U.S. southerners/ working-class white activists called the Young Patriot Organisation joined forces with the Chicago Black Panthers to fight systemic class oppression. Black Panther leader, Fred Hampton recognised that all groups suffering from poverty, unemployment, and police violence could unite across differences to pool resources and share strategies for providing community services like health clinics, food and shelter, and legal advice. These groups could better protect themselves from classist institutions (like landlords and the police) by connecting to a global class struggle, and then applying those principles locally. Solidarity struggles connect micro actions with the macro to create meaningful, lasting change.

Being in solidarity with marginalised groups should not be conditional on their solidarity or alignment with another anti-oppressive cause. While it may be difficult to hold the complexities of disagreement (particularly when it hurts another oppressed group), we know this is often created from a deep history of marginalised groups being pitted against each other, which is not so easily undone. In order to move away from a transactional mindset of solidarity, this requires prioritising a group’s humanity separate from their political or moral beliefs. 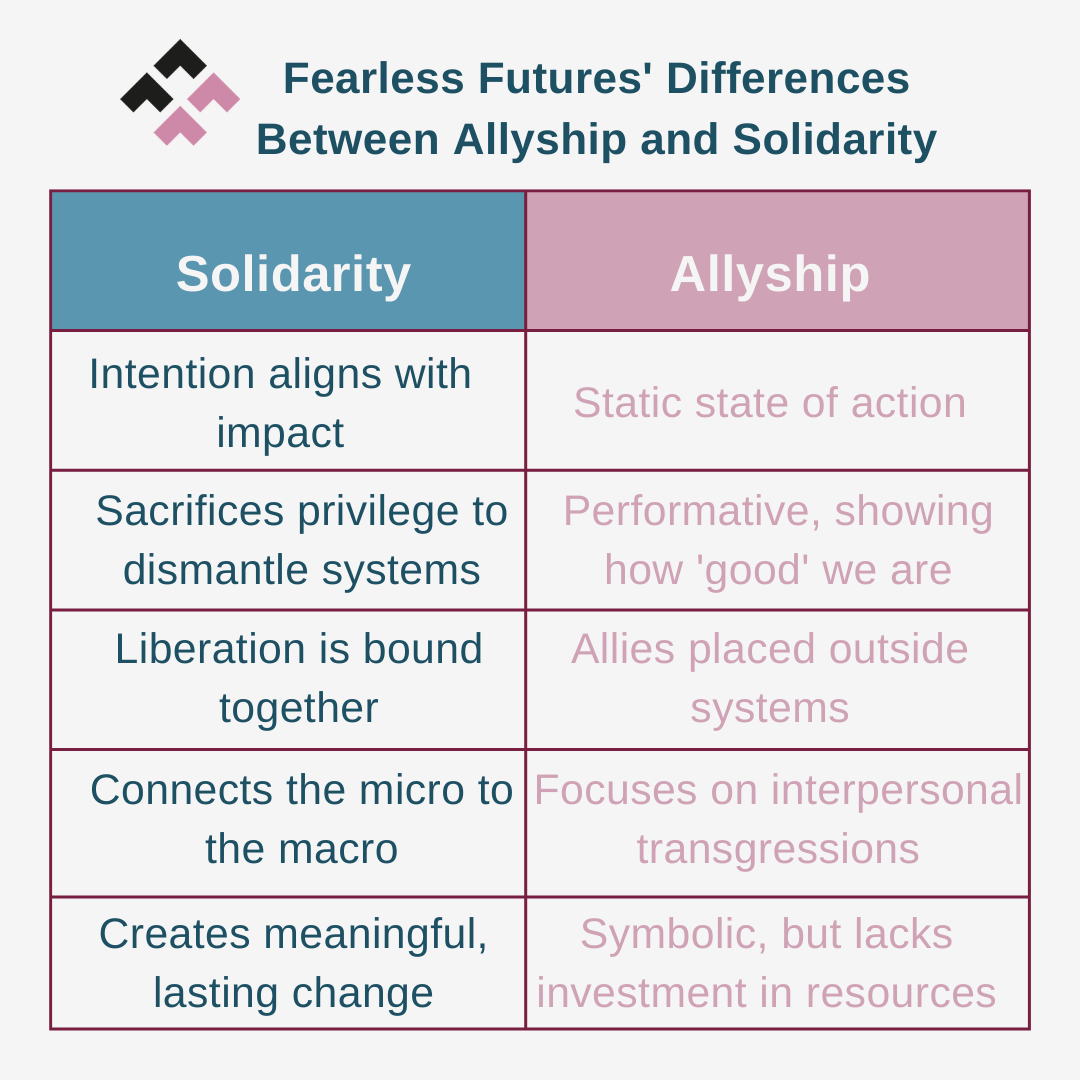 [Image description: A teal headline says “Fearless Futures’ Differences Between Allyship and Solidarity” Below is a T-chart, on the left in teal says Solidarity: Intention aligns with impact, Sacrifices privilege to dismantle systems, Liberation is bound together, Connects the micro to the macro, Creates meaningful, lasting change. On the right in pink says Allyship: Static state of action, Performative, showing how ‘good’ we are, Allies placed outside systems, Focuses on interpersonal transgressions, Symbolic, but lacks investment in resources.]

How to move from allyship to solidarity:

First we must address what questions we need to ask ourselves and each other before we take action.

Next, consider how you can connect the impact of large-scale oppressive systems to micro actions in your own workplaces and communities. Let’s take a look at an allyship example at the macro level, and think about how moving it to solidarity could be applied to a micro example of the same oppression: 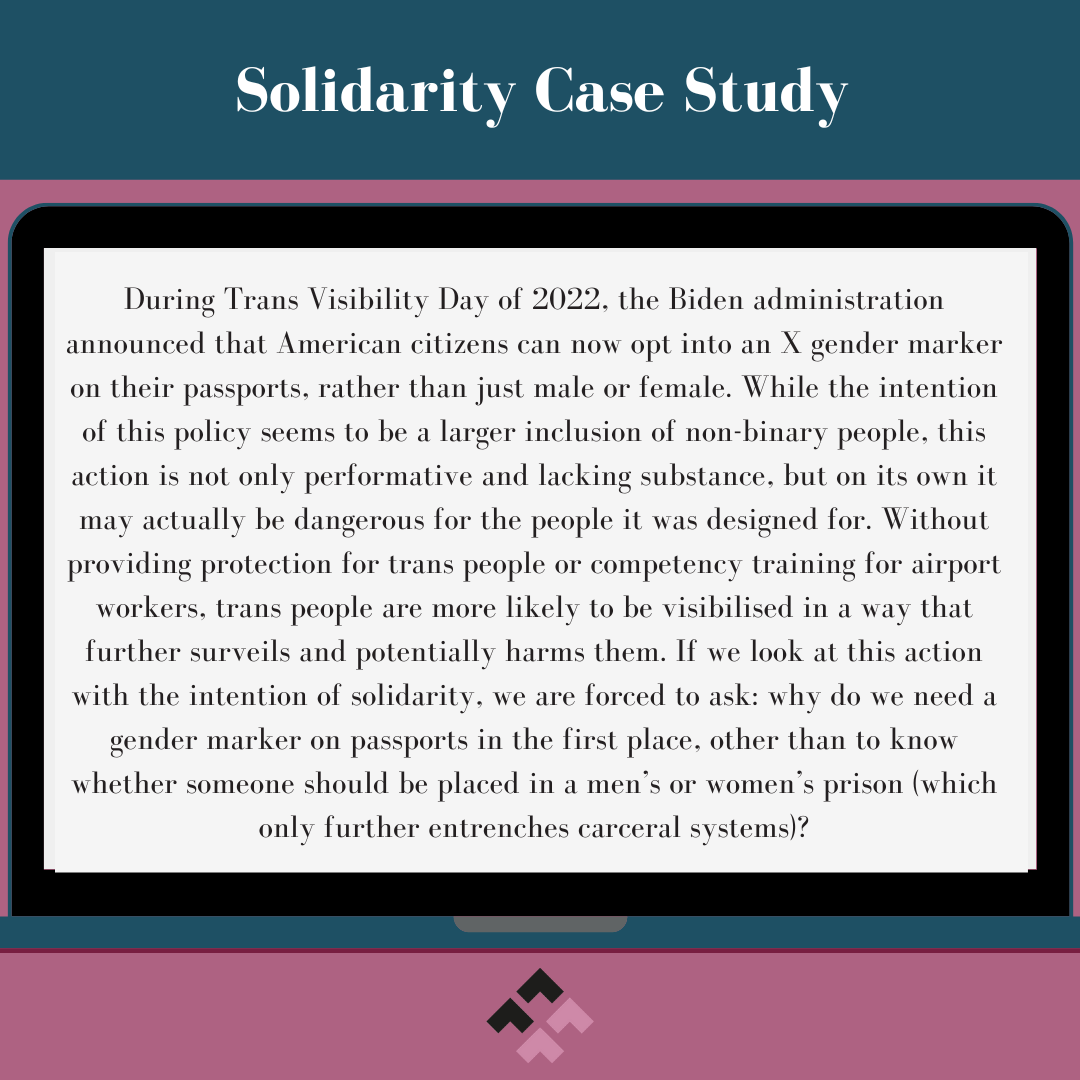 [Image description: During Trans Visibility Day of 2022, the Biden administration announced that American citizens can now opt into an X gender marker on their passports, rather than just male or female. While the intention of this policy seems to be a larger inclusion of non-binary people, this action is not only performative and lacking substance, but on its own it may actually be dangerous for the people it was designed for. Without providing protection for trans people or competency training for airport workers, trans people are more likely to be visibilised in a way that further surveils and potentially harms them. If we look at this action with the intention of solidarity, we are forced to ask: why do we need a gender marker on passports in the first place, other than to know whether someone should be placed in a men’s or women’s prison (which only further entrenches carceral systems)?]

We can see here how the “good allyship” intentions to create a trans-inclusive policy fall short of solidarity because they do not consider the safety initiatives required alongside such a policy to actually create meaningful inclusion for trans people.

Now let’s take a look at how this connects to workplace issues you may have encountered. Some allyship initiatives we see in support of trans people are changing the women’s ERG name to “womxn” or perhaps creating a separate gender neutral bathroom for trans people to use. But we must ask ourselves, what heteronormative/cissexist ideas do these initiatives perpetuate? Is this language shift desired by trans community members, or does it dangerously insinuate that trans women are not actually women? How could we show up with solidarity instead? How do we shift the workplace culture to make it feel safe for trans/non-binary people to use the bathrooms of their choice? What will it take to de-gender all bathrooms so that we do not spotlight trans people and put them in further danger?

When we make connections across solidarity initiatives, we can more effectively build off from and continue a long history of anti-oppressive work, rather than relying on surface-level actions. Using this guide, you learned how to analyse whether an action is allyship or solidarity, what the critical components of a solidarity action are, and what questions we need to ask to shift our allyship into solidarity. Now that you have the tools to identify the intentions and impact of an action, choose a workstream of your choice and assess whether this is a form of allyship or solidarity. If it’s allyship, what will it take to move it to solidarity?