The Origins of anti-South Asian Racism and its Resistance

In order to unpack the day-to-day realities of oppression South Asian people face, we must understand how the overlap of racism, colonialism, and Islamophobia creates particular negative outcomes for this community.

As anti-racism conversations become more and more common in the workplace, we at Fearless Futures have found that companies often don’t know how to talk about or disrupt the unique experiences of racism for South Asian folks. In order to unpack the day-to-day realities of oppression South Asian people face, we must understand how the overlap of racism, colonialism, and Islamophobia creates particular negative outcomes at scale.

People from South Asian communities may come from Afghanistan, Bangladesh, Bhutan, India, Maldives, Nepal, Pakistan and Sri Lanka, which each host a multitude of religions, cultures, and ethnicities. Migration patterns that are often informed by colonial disruption and violence have contributed to South Asian folks living in many different parts of the world.

TOOLS OF COLONIALISM AND RACISM

When the British colonised South Asia in the 18th century, they painted its residents as dirty, inferior, and requiring the “order” of “Western values”. They did this to justify new laws and taxes that would give the British a monopoly over the spice trade. Over the centuries, colonisers stole South Asian wealth and resources, created a dynamic of dependency on the British as a source of employment, and then claimed to have brought democracy and prosperity to its freshly exploited citizens. Colonialism thus created a global economic hierarchy by making it easier for the Global North to trade and freely move capital, while constricting people’s access in the Global South. The colonial narratives and policies that permitted famine and extreme violence in the past continue to uphold a system of racism that subordinates, demonises, and invisibilises South Asian diaspora communities in the West today. 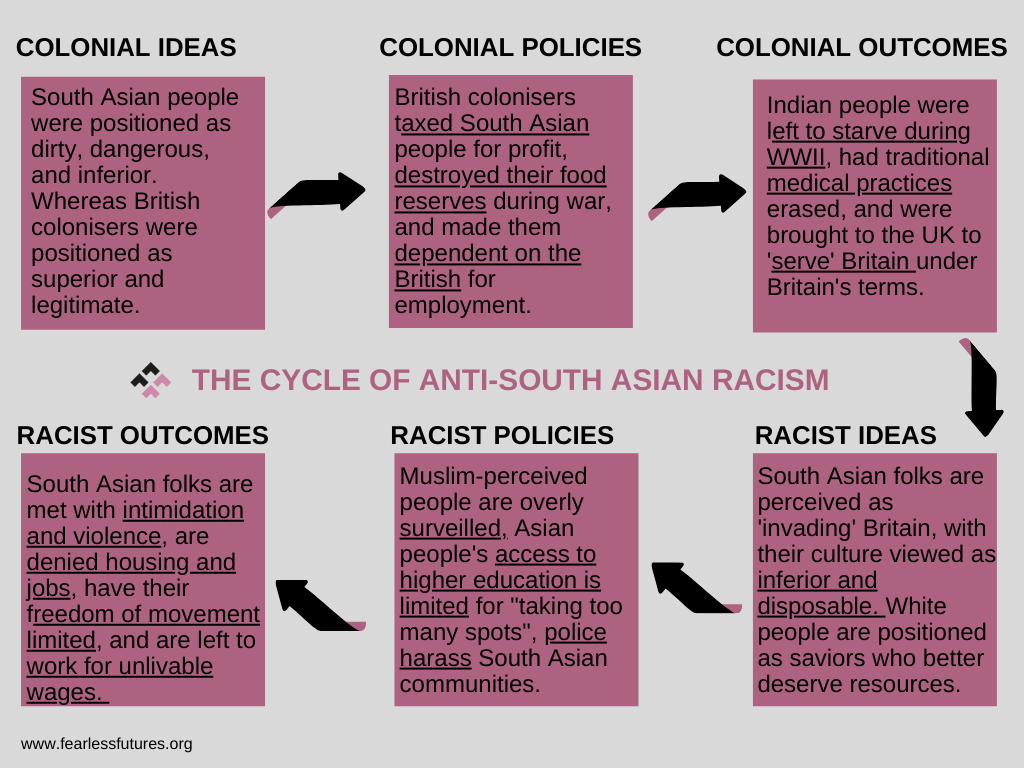 As this graphic shows, the colonial outcomes that left many South Asian people impoverished and/or reliant on British employment allowed the British to easily paint new South Asian immigrants to the UK as culturally and intellectually inferior to its white citizens. We can see here how colonial ideas and policies created very similar racist ideas about South Asian folks that allow for the maintenance of colonial and racist laws and policies today. While colonial legacies and their repercussions are clearly ongoing for South Asian folks in South Asian countries, our focus here is more on how these inform the racism South Asians experience in the Global North.

We can trace back the lack of respect for South Asian lives today to Britain’s complete carelessness and even disdain for South Asian life. During World War II, the British Army destroyed civilian food supplies and transports in Bengal, India in order to defend themselves from “enemies.” An estimated 3 million Indians died in the resultant Bengal famine, and yet this statistic is rarely used in school curricula today that mainly focus on the death toll of Europeans during WWII. Additionally, British colonisers trained Indian doctors in Western medicine in order to create a narrow pipeline out of the colonialism-created-poverty in India, that could fill the post-war British labour shortage. Pakistani and Bangladeshi migrants were used in a similar way for the steel and textile industries to rebuild Britain after WWII. This orchestrated mass migration from South Asia led to the delegitimisation of medical professionals of colour in the UK even while they were in such high demand, with many painted as incompetent and intrusive.

While today some people point to some British Indians’ financial success or how people of colour now make up a quarter of NHS workers to claim the end of racism, making South Asian folks’ humanity dependent on their success creates a good vs. bad immigrant binary. It is very dangerous because it reveals how their rights and livelihoods can be easily disposed of once they are no longer seen as useful. It also ignores the reality of 19th century working class South Asian migrants who had so few financial resources that they were trapped in cycles of poverty that persist today.

For example, from Bangladeshi migrant workers in the United Arab Emirates to women garment workers at Boohoo’s sweatshop in Leicester, UK, South Asian people are continuously viewed as cheap labour, and forced to stay in jobs that do not pay them a livable wage. In the UK, Pakistani and Bengali communities who face high poverty levels, unemployment and barriers to education are ignored, while the news of white pupils receiving low test scores is elevated to a moral panic. All of this ultimately shows us how colonial tactics throughout history that categorised South Asian colonies as inferior led to policies and outcomes that continue to subordinate South Asian people today.

Muslim South Asian folks (or those perceived as Muslim) were and continue to be met with an additional lens of oppression that labels them as dangerous and incompatible with national values: Islamophobia. The increasing anti-immigrant narratives that led to Brexit only further fueled slurs and Islamophobic racism towards Pakistani Brits. The “P-word” was used to deny housing and jobs to Pakistani folks in the 20th century, and is continuously used as a way of making Brown and Muslim-perceived folks feel threatened and unwelcome, regardless of whether they are Pakistani or not. In 1968, Conservative politician Enoch Powell’s ‘rivers of blood’ speech emboldened individual racist attacks against the South Asian community. Meanwhile, the UK government denied South Asian women visas for their children by capitalising on the intersections of racism and sexism to claim they were liars and infiltrators.

This oppression persists today, with the increased racism towards East Asians during the pandemic affecting South and Southeast Asians too. In the U.S., a survey reveals that 1 in 2 Indian Americans reported being subjected to discrimination during 2021. For Indian women who are Muslim, the report went up to 70%, revealing dangerous and deeply held ideas that they must be hiding something, and therefore deserve to be surveilled or punished. In summary, the colonial categorisation of South Asian people as barbaric or dangerous intersects with Western Islamophobia to demonise South Asian people and justify their hyper-surveillance today.

Many South Asian medical traditions were lost to the intrusion of Western medicine. Behind the British pride for building hospital infrastructure in colonies like India is the colonial belief that the British were offering a superior form of health care, ignoring centuries of traditional medical expertise and wisdom. The Global North often deems South Asian culture to be backwards, but then picks and chooses which elements are desirable enough to appropriate for themselves. There is very little attribution for or understanding of the Indian origins of things like “yoga practice, bindis as festival fashion and BYOB karahi houses.”

Today, South Asian oppression is often ignored because of the “model minority myth” that is projected onto South and East Asians alike. The model minority myth emphasises that Asian people are smart and successful, but ultimately harms individuals in this community. When people solely focus on this positive stereotype, they invisibilise racist policies and behaviours against Asian people, and drive a wedge between communities of colour. We also have to observe the double standards created by these myths, in which the achievements of Asian folks are attributed to a “robotic” cleverness, while the same (or lesser) successes of white people are labelled as unique talent and awarded accordingly. We can see then, how colonial tactics that categorised South Asian culture as dirty or backwards led to policies and outcomes that invisibilise South Asian suffering and skill and appropriate their culture.

Our companies and governments have a lot of work to do to address anti-South Asian racism, which starts with celebrating and learning from the leadership of communities that resist their oppression. Former English Cricket player Azeem Rafiq testified in court to the horrible anti-Pakistani racism and Islamophobia he faced on the Yorkshire team in the hopes that his speaking out will bring about change to the institutionally racist sport. 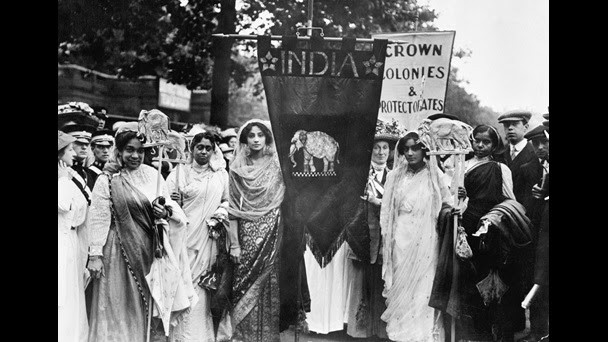 These resistance movements can be traced back since the early 20th century, with Sophia Duleep Singh leading Indian Suffragettes in protest against taxation when they could not vote. Meanwhile, Communist MP, Shapurji Saklatvala advocated for British and Indian working class labour rights, which led to the formulation of the first Indian Workers’ Association in 1937. In 1976, South Asian migrant workers at the Grunwick factory led by Jayaben Desai went on strike because of horrible working conditions, and gained support with the wider trade union movement. In the 80s, when South Asian people were met with brutal street harassment and racism, a Youth Movement formed to defend these communities. Activists witnessed similar racisms regardless of whether they were Muslim, Hindu, or Sikh, and thus bonded in solidarity across these differences to protect all families that were violently targeted. At the same time, South Asian American student groups formed on college campuses to raise awareness about the invisibility of their experiences and needs within the larger Asian American community.

While there is so much more we could say about this topic, we hope this serves as a launchpad for further understanding. We have seen how racism, colonialism, and Islamophobia intersect and interact to create the oppression that South Asian people experience. We have unpacked how three of the key tools of colonialism (subordination, demonisation, and invisibilisation) continue to be tools of racism in the Global North. Using this framework and the inspiration and motivation of South Asian resistance movements, we now have the understanding and tools to meaningfully disrupt racism against South Asian people in our own workplaces and communities. So where do we go from here?

Here are some places to start building your anti-South Asian racism work: