The Global North has a responsibility towards asylum seekers from the Global South as a form of reparations for the costs of colonialism.

Over the years of Fearless Futures’ work, we have found that companies sometimes do not know how to make the connection between their inclusion and equity work and broader solidarity with migrants and refugees. Using this explainer, you can unpack the narratives about immigrants that are used to justify denying them basic human rights. By revealing the oppressive intentions of these myths, you will better understand the impact of anti-immigrant policies and what your company can do to disrupt them.

They are breaking the law.

All too often, we hear that people are not anti-immigrant, they just want people to migrate through ‘legal’ means. However, for people migrating from the Global South, there is a near impossible standard to legally move around our planet, which is rarely applied to immigrants from the Global North. Essentially, people move around the world, but only some people’s movements are criminalised. Why is it that European and North American passport holders can frequently fly to work or vacation anywhere in the world, while those from Asia, Africa, and SouthWest Asia and North Africa (SWANA) are assumed to be infiltrators or require burdensome visa applications that may be denied? Because anti-immigrant laws and borders seek to perpetuate the historic inequality between the Global North and South created during colonialism and maintained by the policies of European and North American geo-political allies.

Let’s look back to the colonial origins of the laws that determine who can seek asylum in the first place. Originally, communities that have been colonised were intentionally positioned as inferior and not ready for human rights, so that they could not apply for refuge from predatory colonial rulers. More recently, these narratives were then transformed to portray newer asylum seekers as liars who were trying to cheat the system. 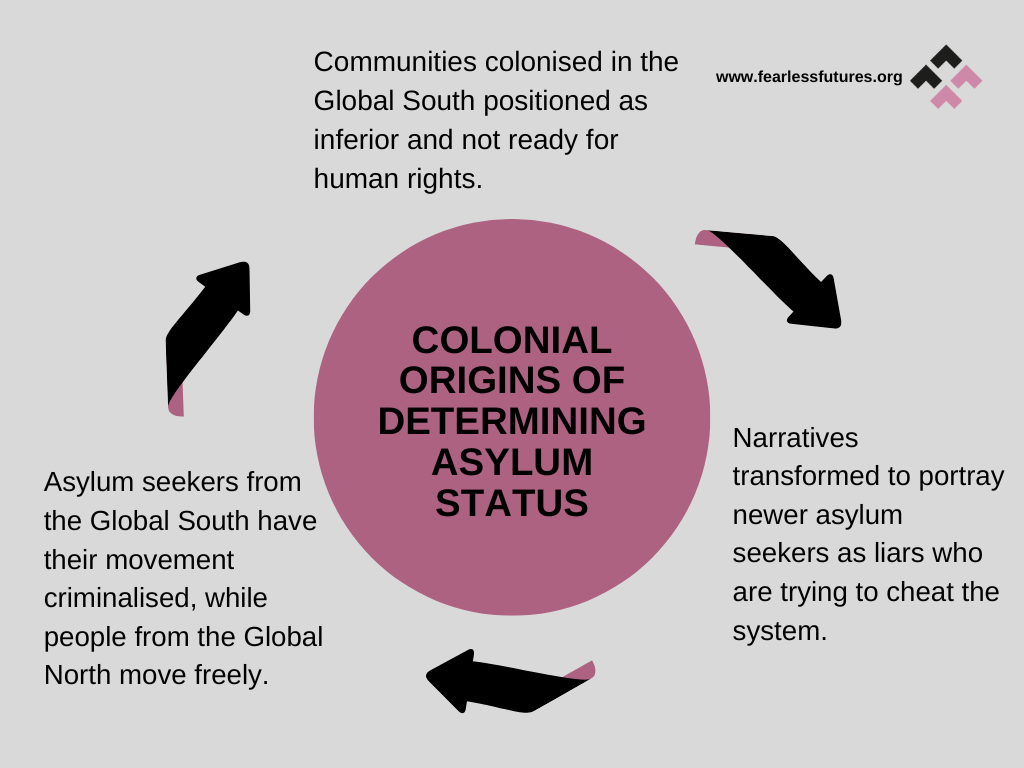 But we have to question the political and social narratives that we have decided are ‘natural’ or normal. The law is an instrument for those in power and a tool of oppression, NOT an inherent moral arbiter. We can see this in how the law around migration has changed significantly over time. Passports weren’t generally needed for international travel until the first world war, which tells us that people have always moved around, and it’s a new phenomenon to require proof of citizenship. It is paradoxical then, for people in the U.S. for example, to demand migrants be restricted at the border, when their own colonial ancestors arrived on indigenous land without any ‘documentation.’

Today, countries use outdated criteria of “persecution” to establish someone as a refugee, when the more pervasive threats they face are “environmental degradation, starvation, and gang warfare” that was usually created by the Global North. For example in 2020, there were at least 50 million climate refugees displaced by disasters like droughts, desertification, and mass flooding, and this number only continues to grow exponentially alongside climate change. With the Global North producing the majority of emissions, the disproportionate impact on the Global South must be accounted for through things like providing asylum. In addressing the claim that refugees are breaking the law, we must first ask whose interest that law was created in, and who does not have borders imposed on them.

The countries they’re seeking asylum from should be responsible for the bad conditions/violence they’re forced to flee from.

While governments anywhere have a responsibility for the safety and rights of their citizens, we must address the imbalance created in many formerly colonised countries. Many people seek asylum in some of the same places that plundered, exploited, and destabilised their origin countries. As the Sri Lankan writer and activist Ambalavaner Sivanandan said: “We are here because you were there.” Therefore, it seems reasonable to suggest that the Global North surely has a responsibility towards countries in the Global South as a form of reparations for the costs of colonialism. Author Suketu Mehta notes that “Fair immigration quotas should be based on how much the host country has ruined other countries.” Looking at this timeline, you can witness the pervasive history of this phenomenon (click here for access to further resources and to read in larger print).

Immigrants’ inhumane living conditions, which are often the legacies of colonial exploits, are sometimes so dangerous they are willing to risk their lives to flee. Due to drowning at sea and suffocation in containers, there have been 16,264 refugee crossing deaths (that are documented) across Europe. This tells us that the conditions of violence or poverty refugees experience is so extreme that they HAVE to leave, despite the horrifying danger they must put themselves in to do so. Rather than make travel safer or provide economic support for their home countries, countries in the Global North use any means possible to limit who qualifies for asylum.

They are taking our jobs.

This particular propaganda has been pushed so heavily by politicians, that far-right nationalists like French Presidential candidate Marine Le Pen have now become mainstream. Le Pen uses deeply Islamophobic ideas of African and Muslim immigrants as dangerous and threatening to propose that citizenship be limited to those who have “earned it and assimilated.” This not only makes immigrating to France as a Muslim nearly impossible, but it threatens the lives and religious freedoms of French Muslims. Similarly Islamophobic themes were used by politicians in the UK to historically break from the EU during Brexit.The job-stealing narrative is not just false, it is a deliberate tactic. Media outlets and political parties have historically manipulated public opinion by targeting refugees as scapegoats for the economic degradation caused by their own government’s disinvestment in welfare and social services. As the rich get richer with ease, the tax on being poor grows. To keep people made poor from demanding a redistribution of wealth, governments steer them towards Xenophobia. And who lobbies for and benefits from this scapegoating? Multinational corporations who make big bucks off of the increased funding for border control. Tech and AI companies are reaping huge profits from collecting data on border crossings, as well as for-profit detention centers, and military and arms firms that get paid to gun down and lock up refugees (including children).What is ironic is, if countries spent even a fraction of what they do on border enforcement and detention on economic development in these migrants’ countries, migration pressure would be greatly reduced. Instead, governments are using anti-immigrant stigma to legalise an exploitable migrant labor workforce. Canadian activist Harsha Walia writes how undocumented immigrants “live in isolation with minimal access to basic social services, despite paying into them through their taxes.” Undocumented immigrants are not taking jobs from citizens; they are kept in fear of detention and deportation in order to justify horrible working conditions, impossible hours, and frugal pay that barely keeps them alive. It is largely corporations then that benefit from the desperate situation governments put immigrants in.

Our workplace cares about addressing things like sexism/racism etc. but that’s separate from the issue of refugees.

There is an unfortunate misunderstanding in this statement of how a system of oppression functions. It is exactly those folks most impacted by things like colonialism, racism, classism and sexism who are most likely to need asylum. So for example, borders themselves are sexist by virtue of the violence they create. In “A History of Violence”, Óscar Martínez documents how women making the journey from Central America to Mexico or the U.S. are either raped or forced into unsafe sex work as they seek to get their children out of violent neighborhoods in their home countries. So if our company claims to be anti-sexist, that means advocating against borders and walls that leave women at risk of assault and violence, and ensuring they are not separated from their children, which is a cruel and ineffective ‘deterrence’ tactic. Additionally, while we saw a rallying cry of support and resources for Ukrainian refugees in 2022, if we are to be anti-racist we must be critical of why immigrants of Colour are too often neglected and deported.Another example is LGBTQ+ refugees fleeing persecution and torture who now experience heightened levels of mental health issues from the trauma. For Transgender asylum seekers, they are often met at the border with even more discrimination and violence. When they are placed in detainment centers based on the gender they were assigned at birth and not their lived identity, they are either harassed or placed in solitary confinement, where they meet another form of torture. There is ultimately no ethical way to detain not only Transgender people, but any person. By making the connection between our anti-oppression work and the struggles of migrants/refugees, we can actually deal with the root causes of migration and more effectively address them.

Even if we do care about refugee issues, there’s nothing our company can do.

If you’ve read this far, you now have some tools to directly address this concern! There are many actions to consider when seeking to disrupt oppression against migrants and refugees. Here are a few that range from interpersonal to larger interventions:

With a colleague, use the following scenario to practice how you could bring an anti-oppressive lens to your workplace.

“Before a staff meeting, some people discuss the increase in ICE raids in your city. A colleague, Edward, makes a comment about how it will be better for everyone once the “illegals are off our streets.” Several other colleagues who have undocumented family members are silent the rest of the meeting.”