By gaining an understanding of the roots and connections behind antisemitism, you will be better able to show up for Jewish colleagues and actively disrupt efforts to marginalise them.

In our programmes, we often find that antisemitism is peripheralised as a historical or “Western phenomenon”, or that it’s “not that bad” today. We’d like to bring to the fore how this system of oppression is live, violent, and global — to avoid people ignoring it or becoming complacent about it. In this explainer, you will learn about the gravity of antisemitism, how antisemitism connects to other oppressions like Islamophobia and racism, and the movements working to build solidarity across differences.

By gaining an understanding of the roots and connections behind antisemitism, you will be better able to show up for Jewish colleagues and actively disrupt efforts to marginalise them.

Antisemitism is a system of oppression that affects people who are Jewish by ethnicity and/or religion. Let’s first take a look at the false negative ideas that are used to marginalise Jews: they are often painted as all powerful, conniving or insular. But there is something at odds with these ideas in the context of the long history of genocide and violence against Jews – if we hold all Jewish people to be greedy/have power, how could they also have experienced such considerable persecution and pain? Clearly, Jews do not hold the power that is projected on them or they would be able to protect themselves from such widespread oppression.

Claiming all Jews are wealthy also misses the experiences of some Jews of Colour, working class Jews, orthodox communities in poverty, etc. This is dangerous because a Jew who is in need of resources may not be seen as truthful, or may be seen as trying to accrue resources by cheating the system. The people who do have disproportionate access to resources benefit from this idea by being able to blame/scapegoat Jews while invisibilising their own unearned advantages. There is a cyclical pattern of punishing Jews when they succeed, that can be traced back to the 15th century when exploited European workers were first encouraged to misdirect their rage onto Jews, rather than address the predominantly Christian people who had power over the institutions that exploited them. As JFREJ writes, “European capitalism developed hand-in-hand with antisemitism, and as such the oppression of Jews has been a systemic feature in the functioning of capitalism for centuries.”

Antisemitism also plays out today through holding all Jewish people responsible for negative actions by the State of Israel or certain Jewish individuals (such as Israeli settlers in the West Bank). We see this globally, with rising attacks on synagogues or other Jewish spaces. Originally, European Christian propaganda against Jews was imported into places like South West Asia and North Africa (SWANA), Latin America, and Asia through colonialism. Before the influence of European antisemitism, there was no particular anti-Jewish ideology in these places, and for most of history, Jews and Muslims lived safely as neighbours.

There is a long and disturbing history of oppression against Jews globally, and these ideas are still pervasive and lead to negative outcomes en masse for Jewish communities today.

The gravity of antisemitism

So where does antisemitism play out today? Use the map below to read about just a few of many examples throughout the world. 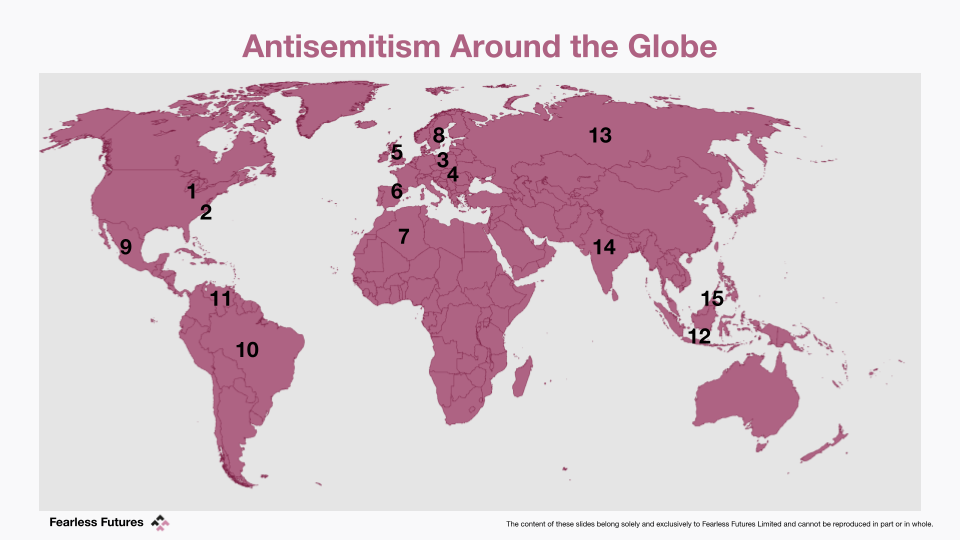 1) In 2022, an Ohio Republican lawmaker proposed the ‘Both Sides’ Bill to require that Ohio schools teach the perspective of German soldiers during the Holocaust.

2) During the 2017 “Unite the Right” Rally in Charlottesville, Virginia police officers escorted and protected neo-Nazis and members of the KKK who wielded torches, carried guns and chanted “Jews will not replace us”, while holding signs of swastikas.

3) Nearly one third of respondents in a 2021 poll about antisemitism in Austria, Hungary and Poland said Jews will never be able to fully integrate into society.

4) The Hungarian government continuously tries to minimise Hungary’s role in the Holocaust by building statues and monuments that shift the blame away from them.

6) During the Renaissance period, Christian nobility in Europe placed restrictions on economic opportunities for Jews, sometimes isolating them physically by confining them to ghettos.

7) The French occupation of Algeria imported antisemitic values, leading to pogroms of Jews in North African in the 20th century.

8) The Nordic Resistance Movement is a Scandinavian neo-Nazi group who have antisemitism as the centre of their ideology and who vandalised synagogues over Yom Kippur in Sweden in 2020.

9) In Mexico, the Anti-Chinese and the Anti-Jewish National League lobbied the government to restrict the immigration of Jews in 1930.

11) In Venezuela in 2014, graffiti appeared in major cities that read “Be patriotic, kill a Jew” and “Jewish pigs, another 6 million.”

12) Due to antisemitism in Indonesia, foreign Jews encouraged one another to proclaim themselves “Buddhist” or “Unitarian” rather than reveal they are Jewish.

13) Russia has equated the Ukrainian state with the Nazi regime to justify its unprovoked aggression, and falsely claims the worst Nazis were actually Jews, and seeks to downplay the role of antisemitism in Nazi ideology.

15) Former Malaysian Prime Minister Mahathir made a speech in 2003 that “the Jews rule this world by proxy” and in 2016 affirmed these statements that “America is under Jewish influence.”

Antisemitism is often positioned as a unique or exceptional struggle, which feeds into the false, harmful ideas of Jews being a separate and impenetrable community. When antisemitism is positioned as so different from other oppressions, it prevents those who wish to fight it from being connected to wider solidarity efforts, which is incredibly useful to those who benefit from a racially unjust world. The logics behind antisemitism are actually quite connected to those behind Islamophobia and other racisms. Across all three, Jews, Muslims, and People of Colour are racialised when it is convenient for those in power to benefit from White Supremacy. Racism, antisemitism and Islamophobia all draw on ideas of “other” and “danger” to scapegoat and retain power. With the rise of ethno-nationalism all over the world, we must interrogate how all of these communities are targeted for the purpose of maintaining a White Christian hegemony in certain regions.

In 20th century Germany, Nazis attributed negative ideas about Jews being all-powerful and greedy to an “unchanging biologically determined heritage that drove the ‘Jewish race,’” in order to target them as enemies of the state and justify their genocide. We can see then, how Race has been socially constructed to establish hierarchies and accrue power for White Christian people. Today, it is important to note the overlaps in these communities, with Jews of Colour experiencing racism and Mizrahi Jews being on the receiving end of Islamophobia if they are read as Arab. However, we frequently see Muslims, Jews, and People of Colour pitted against each other or forced to scramble for limited resources and attention. While there are of course differences in the daily violence or privileges each of these groups face, who does this scarcity mindset ultimately serve? Institutions that privilege White Christian people and values by default. When we are instead aware of the connected logics behind these oppressions, we can work to create coalitions of solidarity movements, so that no one is deprioritised.

So how do we start building solidarity across marginalised communities and actively disrupt antisemitism, Islamophobia, and racisms? We can look to the leadership of grassroots groups organising for collective liberation to see what it looks like when it’s done well.

For example, there are many Jewish organisations such as Jews For Racial and Economic Justice (JFREJ) who work to mobilise the wider movement of liberal Jews to hold accountable Jewish institutions that do not represent them. JFREJ also articulates the responsibility White Jews have to “confront the material privileges that they were granted by accepting white supremacy, and to disinvest from the safety and comfort that comes with those privileges.” They put this into practice by putting their bodies on the line at the 2019 Never Again Action shut-down of an ICE immigrant prison in New Jersey. By evoking the atrocities of the Holocaust imprisoning and murdering Jews, activists helped amplify how the caging and deportation of immigrants in the U.S. today would not be similarly ignored.

Other Jewish groups such as Na’amod UK and Jewish Voice for Peace actively campaign against Islamophobic and antisemitic policy, as well as fight for the end of the occupation of Palestine. There are also countless examples of Muslim activists and groups standing with Jews after violent attacks on synagogues or Jewish individuals, such as in New York and Texas.

Any organisation working towards ending White supremacy will embrace the allyship of Jews, and incorporate their safety into such efforts. If you are looking to disrupt antisemitism in your own workplace, consider the following questions: