The Systems of Oppression Behind Fatphobia

Once we understand why fatphobia was created, and the White patriarchal order it benefits, we can directly disrupt harmful outcomes that fat people experience.

Fatphobia is the vilification of or discrimination against fat people that pervades across industries, institutions, and individuals. This piece will break down the historical origins of fatphobia, as it was constructed to uphold racism, sexism, disablism, colonialism, cissexism, classism and other oppressions. Once we understand why fatphobia was created, and the White patriarchal order it benefits, we can move away from harmful narratives that fat people are ‘lazy’ or ‘unhealthy.’ We will then look at some ways our workplaces can directly disrupt fatphobia, in order to deprioritise colonialist and Eurocentric beauty and health standards.

When we look at the outcomes of a system of oppression, there is a dangerous tendency to see them as distinct events that are separate from the centuries of oppression that created and uphold them. For example, when people do not interrogate how ideas of what is considered ‘attractive’ and ‘desirable’ are rooted in oppression, we get strange ideas of the solution, and perhaps confuse what the problem even is. We see this in recruitment initiatives that claim to address a ‘beauty bias’ in hiring, or product advertisements that encourage “every Woman to feel beautiful.” What these initiatives don’t ask is whose perspective defines beauty? Or, why is it so important that Women feel beautiful, and for whom? This also often shows up in diet culture, where companies push people to lose weight under the guise of ‘health’, without questioning how weight loss initiatives themselves can be unhealthy and unsustainable. Ultimately, advertising and marketing, as well as how we police our own and each other’s bodies, are deeply connected to systems of oppression.

The project of sexism and racism to link fatness with laziness and unhealthiness harms everyone, but especially fat people. Rooted in disablism, fat people are treated as deficient and at fault for negative outcomes they may experience due to their bodies (such as health, bullying, or social isolation), rather than the environments that create these conditions. When people’s value is determined by the ‘productivity’ of their bodies, ‘health’ becomes a dangerous measure of one’s morals. The entire medical system is a nightmare to navigate for fat people, who are denied access to life-saving medicines and surgeries because doctors insist they will feel better if they just lose weight. The stigma is so pervasive that fat people are more likely to be denied jobs or convicted in a trial. There is a deep psychological impact too, with fat kids more likely to be bullied in schools. Additionally, at least 9% of the population worldwide will have an eating disorder in their lifetime.

For People of Colour who already often face discrimination across these areas, being fat compounds the disrespect and violence they will experience. In The Racial Origins of Fatphobia Doctor Sabrina Strings explains how fatphobia is used to target racial minorities as especially ‘unhealthy.’ Leading morbidity rates among racial minorities are often blamed on their own diet/exercise, rather than on the medical institutions that failed them.

Let’s take a look at the origins of Western health standards, that have both shaped Gender norms and enforced the idea that health and beauty can only be achieved through being ‘thin’. 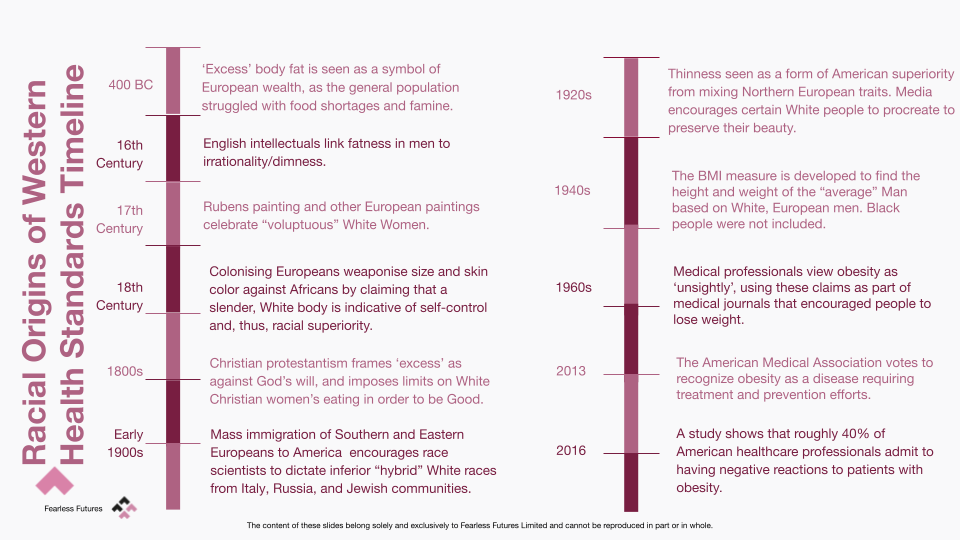 This timeline shows us how values of beauty based on body size in the Global North have changed over time, and contributed to social and medical stigma against fat people today. While the gaze of White Male artists and scientists originally favoured ‘heavier’ people, ‘thinness’ became a racially coded form of distinguishing superiority. As Strings writes, Europeans and North Americans needed to create something in opposition in order to establish a racial hierarchy. She argues that White and Black Women were originally praised for their ‘voluptuousness’, but a stigma against fatness was then attached to Black Women in order to paint them as inferior, and White Women were encouraged to lose weight to distinguish their status.Through the slave trade, colonisers positioned Black people as “counterpoints” in order to link thinness to White superiority (Strings, 2019). This project of racemaking was critical to the colonial agenda of painting people in the Global South as less than human to justify their enslavement, colonisation, and exploitation. As colonisers spread Protestant Christianity too, the moral disdain for ‘over-indulgence’ helped shape anti-fat bias.

Ultimately, it was Men dictating their own (often fluctuating) ideas of taste that determined what was considered ‘healthy’ for Women, rather than what was actually good for people’s individual lifestyles. A few examples of this:

The enforcement of these gender norms of course served to preserve Men’s power by limiting Women’s access to decision-making.

Over time, private companies in the U.S., many of which worked with weight loss clinics, lobbied to put the issue of obesity on the national agenda. Capitalism and profit, not people’s health, determines the scope of healthcare. With the ‘obesity issue’ seemingly so pervasive, we have to ask whose research is believed? In 2013, two medical studies showed completely opposite findings about the increase in obesity, yet it was the sensationalized study that claimed that Black Women had the highest risk of death from obesity that was picked up by news channels and public concern, while the study revealing that obese people had a similar mortality risk to those of ‘normal’ weight was largely ignored or attacked by reviewers. We can see then that fatphobia is not about health at all. It was only once racialised attitudes against fatness were embedded culturally, that the medical industry began vilifying obesity.

Once we understand the history and harm of fatphobia, we can move into the critical work of disrupting it in our own lives. Use the following questions to analyse how fatphobia shows up in your own workplace, in order to begin disrupting its logics.