Anonymous recruiting: to do or not to do?

Much time and energy is spent on how to tackle the question of ‘bias’ in recruitment. Anonymisation (‘blind recruitment’) is often positioned as the silver bullet to creating a more ‘diverse’ and ‘inclusive’ workforce. But is it?

Given that Fearless Futures recruits people and we deliver education on designing inclusion into our systems, it seems fair to explore how and why we do what we do, what we have changed with time and what we have learnt along the way about anonymisation in the recruitment process.

A couple of years ago, when we were hiring a new cohort of Trailblazers (what we call our in-school programme facilitators), we requested that people respond to the question: “explain intersectionality in an easy to understand and engaging way to a 14 year old” as part of the application. This was because in recruiting previous cohorts we had only asked for traditional (non-anonymised) CVs which we realised, while useful, didn’t tell us how engagingly and accessibly a person would be with helping young people grapple with inequity.

So having identified a need for a more dynamic application process that better tested the skills we believed we needed for the roles, we gave applicants the option to respond by either submitting a video or a voice recording.

So far, nothing too alarming. However, based on the people who we ended up taking to training and matching this back to their applications, we observed that the women of colour overwhelmingly applied by voice recording and the white women by video. Why was that? We obviously cannot know for sure without asking each person (and even then, they may not tell us the truth). But our hypothesis based on our understanding of inequity is that in a world that devalues and deprioritises women of colour, opting to apply by voice note may have felt to be the safest option to achieve success in the process. If you cannot trust that your possible employers will be able to see your humanity and talent — because the world has shown you that already — then not sharing that part of you for as long as you can, is a rational response. Additionally, there is no doubt that a voice recording is the least time intensive option and didn’t require access to fancy equipment to appear good. As such class and wealth, and their intersection with race, provides useful analyses for understanding what happened.

What did we do with this data? The outcome we wanted was for women of colour to feel safe in applying to be a Trailblazer; to make the process accessible; and meet our needs to understand the applicants’ skill. In response to our findings, we made voice recordings the sole option for applicants. We did this so that we would be comparing like for like and not erroneously attributing additional weight to one person’s application because they happened to include fancy music in the background and a snazzy font to introduce themselves.

So does this mean we give anonymisation a thumbs up? Not necessarily. We continue to pursue this route because of how applicants organised themselves in response to the options we provided (video or voice), taking into account an applicant’s time/effort to apply, in light of our desired outcomes.

For other roles we have recruited for we have also had mixed candidate responses across instances where we have experimented both with anonymisation and visibility. Some candidates have said they have valued the principle of total anonymisation — where we uniformed the process entirely and a name became a candidate number based off a phone number, and there were no CVs, just submissions into an e-form. Others have felt they weren’t able to show their fullness, obviously, through such a process.

Despite existing in a context where we did and do — across the methods we have tested — consistently hire people that exist at the intersections of inequities, we feel certain that the e-form/candidate number process is not the right thing to do. You might ask why, if anonymisation delivered the intended outcome, you don’t keep it in place? Because how you do something is as important as what gets done. That’s why it is no longer part of our recruitment process.

As we engage with the concept of anonymisation as a tool, the question we need to ask ourselves is: before anonymisation was all the rage and everyone was building bias blockers — why are people with ‘Muslim-sounding’ names three times more likely to be passed over for a job? Why do companies who are hiring need to erase certain people’s identities to enable their employment by them?

Why do companies who are hiring need to erase certain people’s identities to enable their employment by them?

The under-representation of certain groups in certain professions and across organisational hierarchies is a designed outcome of systems of inequities. The outcomes are made possible because of 3 rough parts to such a system: 1) ideas at the root of these systems; 2) the structures across and through society that organise power and 3) inter-personal relationships that reproduce the way power is organised and maintains these unequal relations.

If we really want to know what’s going on with the rejection of people with a ‘Muslim-sounding name’ we first need to surface the ideas about Muslim people at the root of Islamophobia that the recruitment process perpetuates.

What ideas about Muslim people are central to Islamophobia? Core ideas include that Muslim people are dangerous, irrational and to be feared. If you’re a Muslim woman, especially if you wear hijab, you’re also understood through an idea that you’re both dangerous and submissive/oppressed (and therefore in need of being saved by good white western people, for example). These ideas are held up at the structural level of society — the level of society in which power is organised — by such policies and processes at the institutional level, such as recruitment. We can see how recruitment plays a role in organising power in society: being unemployed, underemployed or spending so much longer finding a job directly informs a group’s material conditions, by which I mean the conditions that determine whether they can live dignified lives, have freedom from poverty as well as freedom to move around uninhibited and unwatched.

So, to return to my question above: why do companies need to erase certain people’s identities to enable their employment by them? Some companies need to do this because they cannot trust that they will otherwise be able to acknowledge a Muslim person’s humanity. The company cannot trust that they will be able to acknowledge anything other than a dangerous, irrational person they should fear, in the Muslim person.

Though I’ve never seen a new product, tool or device launched with quite this announcement.

What are we communicating to some people when we say they need to hide who they are to in fact be seen? As Nicole Crentsil, co-Director of Black Girl Fest said after a recent launch of a ‘bias blocker’ tool: 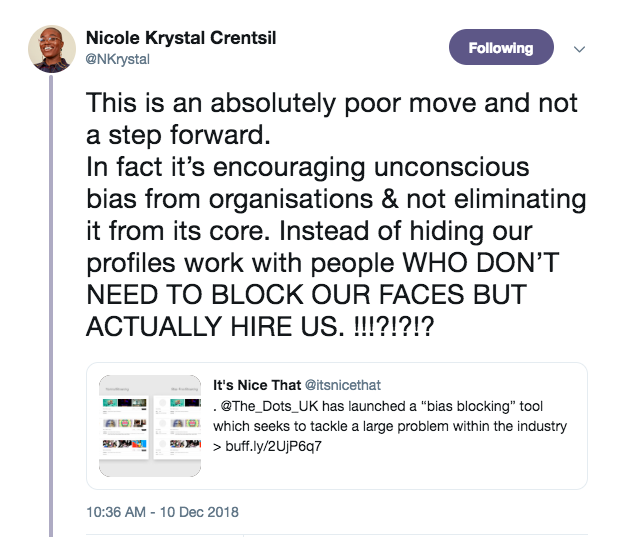 What does anonymising people’s applications say about the cultural fabric of the organisation and how that person, if they have any chance of getting selected through the interview process once their true identity has been revealed, will be spoken to at the water cooler, in a meeting, or how they will be valued in their performance review?

What’s clear here is that the cultural conditions of our companies — Fearless Futures included — informs who we will hire. Eventually, the company with the anonymisation tool will have to meet the marginalised folks. They will be face to face with them for an in-depth interview. What’s the plan then? Whether or not your culture actively seeks to disrupt normative ideas and ways of being and doing that ordinarily value middle classness, whiteness, maleness, cisness, ablebodiedness etc is what will determine who belongs and is legitimate in your company over the long term. A quick fix anonymisation tool, absent deep transformative cultural work, won’t get any of us anywhere. Everyone in our companies must have the muscles to identify what dynamics are going on that maintain the status quo and keep certain groups out.

It’s hard to be wrong. It can be tricky to uncover the root. It can be difficult to interrogate and critique ourselves — especially without conceptual frameworks to help us navigate what’s what. Yet it’s essential. Without this, we aren’t going anywhere fast.